Facebook’s Telecom Infra Project (TIP) had its first summit in California, and the results are impressive: The introduction of Voyager, the availability of full OpenCellular specs. the addition of new members, and the establishment of  TIP Ecosystem Acceleration Centers around the world. With this, Facebook efforts to transform the telecommunications industry with an OCP  data center like approach continue at brisk pace.

What is Facebook’s Telecom Infra Project (TIP) and Who Are the Members?:  Facebook announced TIP in February 2016 at Mobile World Congress in Barcelona. TIP is the way for leading technology providers to develop new technologies and rethink approaches to deploying global network infrastructure to support emerging 5G networking, IoT and virtual reality use cases. It has over 300 members including the latest additions Bell Canada, du (EITC), Accenture, Amdocs, Canonical, HPE, Giles, NBN, Orange, Telia, Telstra, and Toyota.

Voyager is an open approach for switching, routing, and transport:  Meeting the needs of  a global network infrastructure requires both wireless connectivity and scalable, cost-effective backhaul transport. Facebook believes that fiber-based technologies — particularly switching, routing, and transport DWDM technologies are the best choice. Facebook’s engineering team has been working on a new approach to these challenges called Open Packet DWDM. Open Packet DWDM uses combined packet and dense wavelength division multiplexing (DWDM) technology for metro and long-haul fiber optic transport networks. Facebook will contribute Open Packet DWDM to the Telecom Infra Project (TIP) as well as the new  new transponder platform called Voyager which is based on the Open Packet DWDM transport architecture and implements industry’s first white-box transponder with an IP/MPLS routing solution. Voyager’s design will be available to the TIP community to enable disaggregating the hardware and software components of the network stack. Finally Facebook said that Voyager has already being successfully tested with TIP members Equinix and MTN. 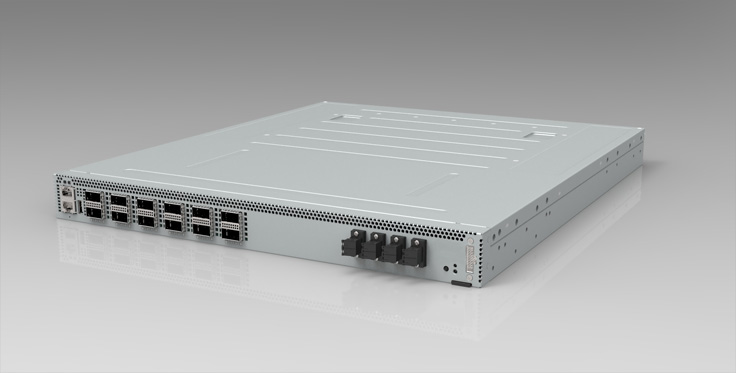 “ we believe that a key to efficiency is enabling open and unbundled solutions,”

The first version of Voyager is shown above leverages data center technologies used in the Wedge top-of-rack switch including the same switch ASIC as Wedge 100 for aggregating the 100 GbE (Broadcom Tomahawk). In addition, Voyager incorporates a DSP ASIC and optics module (AC400) from Acacia Communications for the DWDM line side. Lumentum developed a terminal amplifier specification so that multiple applications can run on top of the open software layer to enable software innovations in DWDM system control algorithms and network management systems. Voyager’s optical capabilities are suited from metro to ultra-long-haul transport. Facebook worked with Celestica on the supply chain and with Snaproute on the software architecture for the end-to-end solution. Voyager makes use of hardware/platform management daemons to implement the network element software stack. These daemons enable configuration, management, and monitoring of the hardware and provide services to higher-layer software to provision the hardware. The middle layer of the software stack has protocol and infrastructure daemons that implement core switching and routing. Above the protocol/infrastructure layer resides the management layer to configure of various services and to monitoring the health of the system with events, faults, and alarms.

OpenCellular designs and schematics are now fully open source within TIP: Facebook sees this as instrumental to accelerate the industry’s ability to provide wireless access in remote areas of the world. Facebook Karthic says: “We’re excited to see how this knowledge transfer will empower our partners to develop solutions that meet the unique needs of remote communities.”

TIP Ecosystem Acceleration Centers: Facebook and TIP members “believe that innovation can and should come from everywhere, beyond the current sources. We need to find ways to attract the brightest entrepreneurial minds and innovative investors to work together as part of the wider TIP community to produce breakthrough technologies and products in telecom infrastructure space.” To achieve this goal, they envision opening a network of centers around the world to incubate local talent and accelerate product development. The fist one will open in Seul early Q1 2017 sponsored by Facebook and SK Telecom.

New People and Process Project Group within TIP:    This new group is formed to develop and share cultural and process transformation best practices that can improve operators’ key metrics. The group co-chairs are Bell Canada and Facebook. And the members of this group are Accenture, Agilitrix, Bell Canada, Deloitte, HPE, NBN, SK Telecom, Tata, Telefonica, and Telstra.

What Happens When Industries Like Transportation Aim at Connectivity, 5G